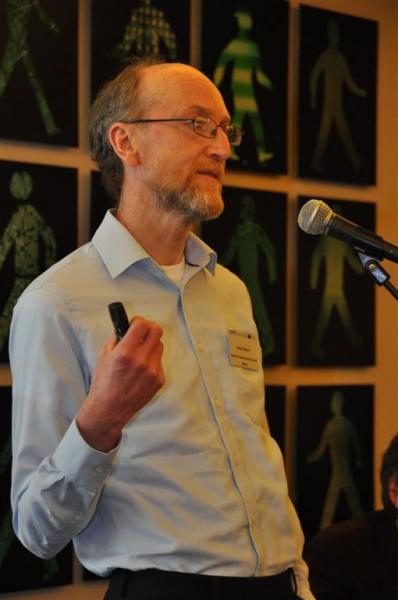 Since 2000 Peter Pollard has worked for the Scottish Environment Protection Agency (SEPA) and is currently manager of the national water policy unit. SEPA is responsible for river basin management planning in Scotland. It is also responsible for monitoring the water environment and is Scotland's principal environmental regulator, controlling, among other things, water abstraction, dam construction and operation, other engineering works in the water environment; and point and diffuse source pollution. Peter has advised on the development of much of the legislation that now underpins protection of water in Scotland. Prior to joining SEPA, Peter worked for a number of years as an environmental consultant and then for a non-government environmental organization, coordinating the production of catchment management plans.

1.      Please introduce yourself and explain your affiliation with rivers.

Within SEPA I am currently involved in Scottish river basin planning. I manage a team of 9 people in the National Water Policy Unit, which is focused on the coordination of our work on water, from river basin management plan production to implementation of measures and legislation development. We also work closely with colleagues across the UK, in the UK Technical Advisory Group on the Water Framework Directive (WFD). At European level, I am involved in the Common Implementation Strategy on the WFD as one of the chairs of the working group ECOSTAT on the ecological quality of surface waters. I have been coordinating the intercalibration exercise on good ecological potential, which of course has quite a big focus on rivers.

2.      In your opinion, has progress been made since the 1st RBMPs in terms of awareness of hydromorphological issues in the EU and specifically in Scotland?

In Scotland, there has been a significant increase in awareness of, and focus on, hydromorphological issues over the course of the first cycle of river basin management. This has been helped by an initiative called the Water Environment Fund that I will talk about in more detail later on. SEPA and other partner organisations have been working with farmers, other rural land managers and local government authorities on a number of restoration projects. As well as delivering environmental benefits, these projects are playing an important role in increasing understanding within the organisations involved as well as spreading awareness more widely. However, there is still a long way to go to raise full awareness about the need to, and benefits of, improving hydromorphology.

At the EU level, the European Commission has made hydromorphology a key topic, emphasising the importance it attaches to hydromorphology. There are now a number of work streams under the Common Implementation Strategy looking at issues relating to hydromorphology. These include work by the ECOSTAT Working Group on comparing Member States’ understanding of good ecological potential, the improvement target for heavily modified water bodies.

3.      Has progress also been made on novel approaches to mitigate the impact of such degradation?

In Scotland, we have made significant steps in terms of improving the delivery framework and securing real improvements on the ground.

To help get restoration projects going, we have established a dedicated team in SEPA, known as the Water Environment Fund Unit.  The Unit administers funding provided by Scottish Government and running to around 5 million pounds per year. This is supporting initiatives by groups and individuals across the country. We are also working with local authorities and land managers in four catchment-based pilot projects. The pilots are aimed at demonstrating how improvements to river habitats can be combined with measures that help reduce flood risk.

For the second river basin management planning cycle, we are proposing to:

Our 2nd draft river basin management plans published at the end of 2014 identified the need for this step change in effort and set out 3 scenarios on how hydromorphological impacts may be tackled over the next two planning cycles.

River restoration has to be balanced with the needs of important land uses. Where a river is surrounded by high value agricultural land or hemmed in by urban land uses, the scope for improvement will normally be considerably less than if the river were surrounded by low value land. One of the things we believe we need to develop to underpin our work is an effective way of communicating what we are aiming to achieve by way of hydromorphological improvement in different land use settings.

Concerning novel approaches at EU level, I can share my experience with the work done on the “intercalibration” of good ecological potential. This exercise is assessing how Member States compare with respect to the hydromorphological improvements they expect for:

With regard to water storage schemes, most countries involved (especially those with extensive hydropower) have well developed approaches for identifying what is required by way of mitigation to achieve good ecological potential.

At the moment, it appears that equivalent methods in relation to modifications of rivers for land drainage and flood protection are much less advanced in most countries, with a few exceptions such as Germany. This has implications for how far we can progress in comparing approaches.  It also suggests to me that working out how to address hydromorphological alterations still remains one of the big challenges for river basin planning across Europe.

4.      What are the key hydromorphological issues that currently need to be addressed in the EU Common Implementation Strategy of the WFD?

First of all, an important exercise on the agenda is the “intercalibration” of good ecological potential, which I mentioned above. This is providing an opportunity to share implementation practices and ideas, which is a very valuable process in itself.

Second, we still do not have a common understanding of “what good hydromorphology looks like” across Europe. I think there would be benefits of a further exchange of ideas and approaches on this topic. There is also a real gap in terms of ecological assessment methods that can indicate the ecological effects of hydromorphological alterations.

The ongoing work in the working group on Programme of Measures is providing an opportunity to share ideas and experiences on effective delivery frameworks for hydromorphological improvements, e.g. in terms of funding schemes, etc.

One additional item that needs to be addressed is ecosystem services. Some hydromorphological improvements (to rivers in particular) might have benefits in terms of reducing flooding; reducing river maintenance costs; or improving amenity or fisheries. Because of the awareness gap on hydromorphological issues, it is important to show what these wider benefits are from hydromorphological restoration measures. This is also about understanding synergies with other policy areas. For example, some improvements in floodplains can be achieved by planting more trees alongside rivers. Therefore, we need to make links to policies related to re-forestation and wood industry and show how they can work in practice. It is important to communicate broadly available evidence about possible synergies and spin-offs.

5.    What do you consider as valuable contributions of REFORM so far to river restoration practices and river basin management planning? What do you hope REFORM can deliver by the end of the project in 2015?

A lot of information has been put together in the REFORM WIKI. At the very technical level, the synthesis of understanding about river processes and interactions with aquatic plants and animals is already helping thinking about river hydromorphology and, for me in particular, has highlighted the importance of riparian vegetation. The case study outputs are also valuable in showing what can be achieved on the ground.

REFORM has been evaluating different ecological assessment systems. I am hopeful that the results of this work will provide a useful pointer to how the current gaps in such assessment systems in Scotland and elsewhere could be filled.

The WIKI already includes suggestions on measures that may be appropriate in relation to different hydromorphological impacts. This is very useful but I think the next step would be to pull together available guidance (e.g. from the case studies etc) for practitioners on how to design the measures in the field, including the “dos” and “don’ts”. I hope this might be possible but, even without it, the outputs are helpful in thinking about how to address impacts.

In the final phase of the project, I would suggest producing some sort of synthesis that brings together the ideas on restoration options and the potential ecosystem service benefits of restoration. This could perhaps be done using simple, stylised river catchments to represent a series of common hydromorphological impacts in different land use settings. This links back to what I said earlier about the need to communicate what can be achieved in different landscapes and the associated benefits.

Perhaps the only other wish from me is that REFORM finds some way of helping different audiences with different needs navigate easily to the information relevant to them. This is only an issue because the project has gathered so much information spanning a wide range of disciplines and levels of detail!

6.      How does EU-funded research in general contribute to the implementation of WFD and to what extent are scientific results adopted by Member States? How could REFORM be effective in the take-up of its results in its final year?

There are some obvious examples of the contribution of EU-funded research to the implementation of the WFD. One clear case is EU research done on priority substances and the development of quality standards. I might say that all EU countries have been affected by that. Also the EU FAME project had quite a big influence on the way we think about fish assessment. I believe many EU countries adopted the assessment methods of the FAME project, or, like us, modified or built on them in some way.

Overall, however, I would say that at least in the Scottish context, it is very much national research projects that have directly influenced WFD implementation. For example, we have commissioned our own research on good ecological potential, morphological assessment systems; river flows and ecological assessment methods. Any influence of EU projects on this work is likely to have been indirect – by influencing the researchers involved in the national research programmes. It is not possible for me to assess to what extent this has happened.

Concerning the outreach of REFORM, I believe that the WIKI is a good format to disseminate results. As I said earlier, I think that the current version would still benefit from developing a kind of “sign-posting” for different audiences, indicating the parts of the WIKI which you need to consult “if you are a practitioner” or “if you are a policy-maker working on the delivery framework”, etc.

In general, I think any project, EU or national, is well advised to identify and engage its target audiences at an early stage so that its outputs and their presentation best meet needs of those audiences. REFORM has made considerable efforts to do this and this is already reflected in the quality of the work to date.

Peter Pollard was interviewed on 07 January 2015 by Eleftheria Kampa (Leader of Dissemination and Stakeholder Involvement of REFORM, Ecologic Institute).